Sam presented to the Gulf Coast Veterinary Specialists Ophthalmology service for evaluation of a cataract in his right eye. The owners reported that Sam was having significant vision deficits at home.

Post-dilation intraocular pressures were elevated further: OD 22mmHg; OS 28mmHg. Because of the predilection for inherited angle closure glaucoma in the Siberian Husky, the iridocorneal angles were assessed by gonioscopy. Goniodysgenesis was diagnosed OU as evidenced by the narrow angle (between the cornea and iris) along with the thickened pectinate ligaments coalescing in to a sheet across the iridocorneal angle. Sam was started on Dorzolamide in both eyes every 12 hours. Pre-operative complete blood work and a blood chemistry was performed revealing a mild lymphocytosis. Surgery was planned for the following week.

Day of Surgery:
IOP: OD 27mmHg; OS 24mmHg. We proceeded with surgery as planned to address both Sam’s cataracts and early glaucoma. Surgery and anesthesia was uneventful. Sam was monitored for the remainder of the day and his post-operative pressures remained low. Max was sent home on a topical and oral anti-inflammatory and antibiotic along with continuation of Dorzolamide OU.

Day 1 Post-operative:
IOP: OD 5mmHg; OS 11mmHg. Inflammation (moderate mucoid discharge, conjunctival chemosis and hyperemia, 1+ flare OU) was as expected. Vision had already begun to improve. Due to the low pressure, Dorzolamide was discontinued OD. The Ahmed valve tubing can be seen at OD 10:00; OS 2:00. Both tubes were clear of fibrin and pressures revealed they were functioning well. Corneal Incisions are present at OD 11:00; OS 1:00. 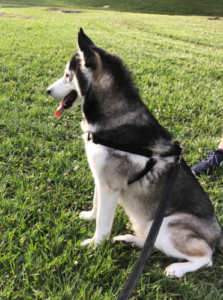 Sam is now seeing and interacting with his friends at the park!

About 50% of canine glaucoma cases are primary glaucomas. Primary closed angle glaucoma is the most common primary glaucoma that occurs when the iridocorneal angle does not fully develop. A condition called goniodysgenesis. While goniodysgenesis does not confirm primary angle glaucoma, it presents a significant risk factor. The Siberian Husky is predisposed to glaucoma with nearly a 2% incidence in North America. (Gelatt, 2013). Therapy involves decreasing aqueous production with the use of medications or cyclodestructive techniques (laser therapy, cryotherapy, etc) or increasing aqueous drainage by placing a new drain (gonioimplantation.) Unfortunately, due to the aggressive nature of primary glaucoma along with the robust healing response and subsequent fibrosis in dogs, glaucoma surgeries have a high complication rate. While maintaining a comfortable eye (low IOP) has an increased success rate, functional vision is lost in about 50% of patients at 1 year after glaucoma surgery. However, without intervention, glaucoma and vision loss are immenent and usually swift.

A cataract is an opacity in the lens and can be qualified based on the degree of lens fibers affected (ie. Incipent, Immature, Mature, or Hypermature), location in the lens (ie. Subcapsular, cortical, nuclear), or timing of cataract development (ie. Juvenile, Senile). The Siberian Husky can develop progressive cataracts seen starting around 6-18 months. (Gelatt, 2013.) When cataracts form at a young age, resorption of the hypermature cataract can occur and actually restore some vision. However, with the lens protein resorbing, the refractive effects of the lens are no longer present. Therefore, while Sam’s vision in his left eye was present (positive menace), he was severely hyperopic (far-sighted.) We elected to perform surgery on his right eye (due to the vision loss) and his left eye (in effort to place an intraocular lens implant to restore his normal refraction and achieve emmetropia.) Secondary to vision loss, one of the most devastating aspects of cataracts is their ability to cause lens-induced uveitis at any stage. This is due to leakage of cataractous proteins through the lens capsule. In our canine patients, persistent uveitis, glaucoma, lens luxations, and retinal detachments are common complications secondary to unattended cataracts. Complication rates are higher than the adult human population due partly to the severity and chronicity of the cataract along with the dog’s more labile blood-aqueous barrier. Cataract surgery is an elective procedure and it is acknowledged that many places in world do not have access to this procedure for people or pets. While many owners many not elect to move forward with cataract removal, assessement of cataracts and secondary complications to catract progression is important. In all cases, our goals are to maintain a comfortable eye for our patients, and to offer vision restoration if possible.   Reference: Gelatt, K.N. (2013) The Canine Glaucoma, In: Veterinary Ophthalmology (ed. Gelatt, K.N) Vol. 5, pp. 1092. Ames: John Wiley & Sons, Inc.