Leo Lambchop presented to the GCVS ophthalmology service for an initial examination of a 6- month duration of a mass under the left eye.  There had been minimal change since the mass was originally noted.   Work-up and treatment performed by Leo Lambchop’s primary veterinarian included dental radiographs and cytology of the swelling, along with systemic antibiotics and anti-inflammatories.

Examination:    Right eye: Normal. Left eye: Discrete, soft, subcutaneous swelling inferior to the globe. Retropulsion of the globe was slightly decreased. Third eyelid excursions were decreased but present. No changes were seen in the posterior segment. 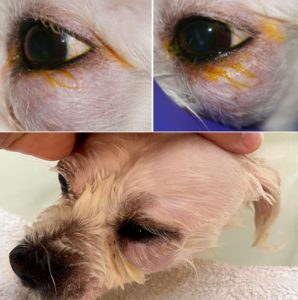 Assessment: Mild ocular hypertension was presumed secondary to compression of the globe from the orbital mass. Retropulsion of the globe did not significantly change the mass position or size which was suggestive of the mass not comprising the entire orbit. The third eyelid mobility (excursions upon globe retropulsion) indicated the third eyelid was not significantly entrapped by this mass.  Based on the ocular examination findings and previous incisional biopsy, differentials included neoplasia of a salivary gland, neoplasia of the third eyelid, or an orbital glandular neoplasia. Further investigation of the extent of the lesion was needed to develop an appropriate surgical plan. A CT scan was recommended. Prior to anesthesia for the CT scan, a complete blood count, blood chemistry, and thoracic radiographs were recommended. Because a heart murmur was auscultated, a full cardiac work-up was discussed.

Two months later, Leo Lambchop was seen for his work-up and advanced imaging.   Lab Work: Three-view Chest Radiographs Echocardiogram and Electrocardiogram Assessment: Computed Tomography with Contrast- Skull   The images below start just inferior to left globe. The first image shows the contrast enhancing mass can be seen causing dorsal elevation of the globe. The mass is seen wrapping around the lateral aspect of the globe and extending posteriorly in to the orbit.

Given the appearance of the mass on CT, a salivary neoplasia was considered less likely and a lacrimal glandular neoplasia was highest on our differential list.   Lacrimal Gland Adenocarcinomas are rare. When they occur, they are more commonly associated with the gland of the third eyelid rather than the orbital lacrimal gland. While local recurrence is typically the biggest concern, metastasis can occur. Because of the concern for recurrence, orbital lacrimal gland neoplasia is typically treated by exenteration.   Benign lacrimal growths include orbital lobular adenoma which are not known to metastasize, but have a high local recurrence rate. They are also typically treated by exenteration.

Eye removal is a challenging recommendation. Regardless of the frequency with which we perform enucleations, it is never an easy discussion. Even when a painful, blinding disease process is present, eye removal can be immensely hard for owners. The eye is seen not only as an important feature of the face and thus the appearance, but many owners attest to the importance of their dog’s eyes as a means of communication. Looking in to their pet’s eyes not only reinforces a mutually loyal connection, but can serve as way to communicate fear and anxiety, enjoyment, or peace and calm. When a patient develops a painful and blinding ocular disease, eye removal offers relief. When it comes to periocular neoplasia, the eye does not necessarily present blinded nor painful. As medical professionals, we can wrap our heads around the necessity for tumor excision with clean margins which at times includes the sacrifice of other functional tissue. However, enucleation of a sighted, comfortable, and communicative eye can be gut wrenching. With the lack of macroscopic disease, reasoning for enucleation (or exenteration) becomes abstract and even academic. As discussion about Leo Lambchop’s case progressed, even knowing the differentials, I found myself debating with the owner and with myself about the necessity of exenteration.   For Leo Lambchop, the CT scan revealed a laterally placed tumor that wrapped posteriorly around the globe in the dorsolateral aspect of the orbit. The orbit of the dog is mostly enclosed in bone making access to retrobulbar disease challenging. Between the zygomatic process of the frontal bone and the frontal process of the zygomatic bone extends the fibrous, orbital ligament. Typically extensive disruption of surrounding musculature and osteotomies are needed for adequate exposure of the orbit.   Ophthalmologists continue to search for techniques to treat orbital disease (specifically neoplasia) without enucleation.  Because of the location of Leo Lambchop’s tumor and after extensive discussion with his owners, we elected to approach surgery with a globe preserving technique. However, if intraoperative information indicated that globe preservation was not possible, the owners understood exenteration would be pursued. Additionally, depending on the histopathology report and possible regrowth, a repeat procedure (exenteration) may be necessary in the future.

The anterior and lateral orbit were approached with two incisions. The initial incision was 15cm long and just ventral to the inferior orbital rim. Placement of the incisions were an attempt to avoid the branches of the auriculopalpebral nerve (branch of the facial nerve) that innervates the orbicularis oculi (responsible for blink function.) Removal of a large portion of the glandular tissue was achieved through the inferior incision. However, it was quite friable and neoplastic tissue remained dorsolaterally and posterior to the globe. A second incision was 15cm in length and made over the superior orbital rim. The orbital ligament was exposed and then transected to allow removal of the remaining proliferative mass. The orbital ligament was sutured at the close of the procedure along with the skin incisions. Given the concern for post-operative swelling and a diminished blink function, we placed a temporary tarsorrhaphy. The mass was submitted for histopathology and Leo Lambchop recovered uneventfully.

Canine lobular orbital adenomas are rare tumors of glandular material. It is unknown which gland transforms in to this benign tumor, but local recurrence is common. Surgically, they are friable and challenging to remove in their entirety.

Post-operatively: Leo Lambchop was recently seen for his 2 week post-operative exam. He has a strong blink function, adequate tear production, and no regrowth. While we are immensely thankful that this was not a malignant process, we will need to diligently monitor Leo Lambchop closely for local recurrence. 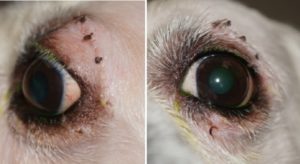 Mr. Leo Lambchop is back to his VERY happy self! 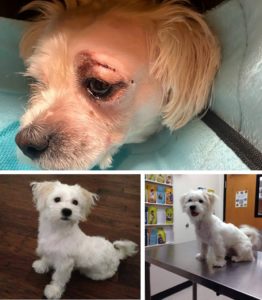