Storm, a 10 year old Australian Shepherd mix, presented to GCVS on 5/22/2019 for further evaluation of recently diagnosed multicentric lymphoma. She initially presented to her primary care veterinarian on 5/17/19 for a suspected left sided tooth root abscess and facial swelling. Enlarged lymph nodes were palpated and cytology with pathology review showed lymphoblastic lymphoma. She is doing well at home. Current meds: Clindamycin and diphenhydramine

Weight: 20.5 kg Storm was bright and alert. Cardiothoracic auscultation was unremarkable. A mild peripheral lymphadenopathy was present. There was mild erythema and swelling above the left maxillary carnassial tooth. No facial swelling or nasal discharge was appreciated. Abdominal palpation was unrewarding due to patient size. Rectal was unremarkable.

19 week CHOP (standard of care) and single agent doxorubicin were offered as first line treatment. Palliative care with steroids was also discussed. Storm’s owner elected for 19 week CHOP and antibiotics were continued for one month for the tooth root abscess. Chemotherapy was initiated successfully without complicating the tooth root abscess, which resolved about 1 month after antibiotics.

Canine Lymphoma:
Lymphoma is a relatively common cancer in dogs. It forms when a mutation occurs in the lymphocyte (a type of white blood cell).The job of the lymphocyte is to make up the lymph tissue in the body, especially in the external lymph nodes, spleen, liver, abdomen, chest, skin, and bone marrow. For this reason, it is considered a body wide (systemic) disease. Currently, there is not a clear underlying cause for canine lymphoma.

Workup:
The workup for a dog with lymphoma depends on their current clinical signs. In most case the workup for lymphoma consists of bloodwork (complete blood count and chemistry panel), cytology/needle aspirate to obtain a tissue diagnosis, and flow cytometry to assess cell type and prognosis. Sometimes, additional tests are warranted and may include chest x-rays to assess for enlarged internal lymph nodes or lung involvement, abdominal ultrasound to assess for abdominal organ (especially intestinal tract) involvement, or a urinalysis if kidney disease is suspected.  An echocardiogram is recommended for dogs with pre-existing heart disease or if they are a breed at risk for dilated cardiomyopathy.

Chemotherapy (general):
Systemic chemotherapy is the mainstay of treatment since lymphoma is a body-wide disease. In general, lymphoma is very sensitive to chemotherapy and will induce remission in up to 95% of patients when multi-agent protocols are utilized (see below). Remission means that the lymph nodes are small, there’s no evidence of organ involvement, or clinical signs have resolved. While most forms of lymphoma are not curable, we are usually able to induce a durable remission and provide a good quality of life.

Contrary to chemotherapy in human medicine, chemotherapy is usually VERY WELL tolerated in dogs. About 30% of patients develop self-limiting mild to moderate adverse events including decreased appetite or diarrhea. About 10% of patients have side effects that require them to return to the hospital for short-term supportive care. These cases are usually due to dehydration or infection from a low white blood cell count. Serious side effects are seen in 1-5% of patients.
Most protocols require a tapering steroid regimen for the first month.

Chemotherapy options and prognosis:
The 19 week CHOP protocol alternates between three different chemotherapy drugs (vincristine, cyclophosphamide, and doxorubicin). More than 90% of patients will go into clinical remission on this protocol, meaning their lymph nodes shrink down to normal size. The median survival time for patients with B cell lymphoma is 12-14 months and is 6-9 months for T cell lymphoma. A second tier option that is less costly and time consuming is single agent doxorubicin. This is given into the vein every 2 to 3 weeks for 5 treatments. The response rate is 70-75% and most dogs survive about 6-8 months. Palliative steroids are inexpensive and will induce a partial response (with a good quality of life) in most dogs for about 2-3 months.

Once patients are finished with their chemotherapy protocol, we recommend monthly rechecks to ensure your pet remains in remission. It is important to remember that most patients will come out of remission before 1 year and will require backup chemotherapy to reach the median survival time. In addition, dogs with T cell (large cell) typically do not achieve as long of survival times. There are many drugs used in rescue lymphoma treatment including Tanovea, Mustargen, CCNU (Lomustine), and others. 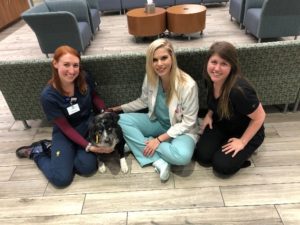 Storm did phenomenal and finished her 19 week CHOP in October 2019. She developed one episode of neutropenia, but felt clinically normal. She had one mild self-resolving episode of gastritis, but no other remarkable adverse events.  Storm remained in a complete clinical remission for 7 months when she relapsed in May 2020. CHOP chemotherapy was re-instituted at that time (since she responded so well the first time). Storm is currently in clinical remission and continues to do well during her current treatments.